In the summer months, the GO train does a service where you and your bike can ride from Toronto to Niagara Falls. When you get to Niagara Falls, there’s a trail that takes you to Niagara-on-the-Lake (it’s about a 22km ride). I can’t resist a good bike adventure, so I rounded up some pals and away we went.

As we walked into Union Station with our backpacks and hogs, we were pretty identifiable as the ‘bike train to Niagara’ type and were immediately approached by a sassy lady in a high-vis vest with sassy, high-vis nails to match. She told us to follow her through the construction-zone that is Union Station (it’s undergoing a big re-vamp).

This service is super bike-friendly. There is a section of the train allocated to receptacles for bicycles. We parked our bikes in there and then sat down and enjoyed the journey.

After about two hours, we disembarked and found ourselves in a drizzly Niagara Falls. Donning our raincoats we set out for the Niagara River Recreation Trail, which is about a block away from the train station. The first stop on the trail was a lookout point to the Niagara Gorge with a view of the whirlpool. Lovely stuff.  Then we stopped off at the Floral Clock… which should be called the Boring Plain Plant Clock. The trail took us along the Niagara River and past some neat sights like a power station and retro mid-century motels, as well as through a very pretty wooded area.  Alex, the troubadour of our group, kept us further entertained with songs and harmonica solos. 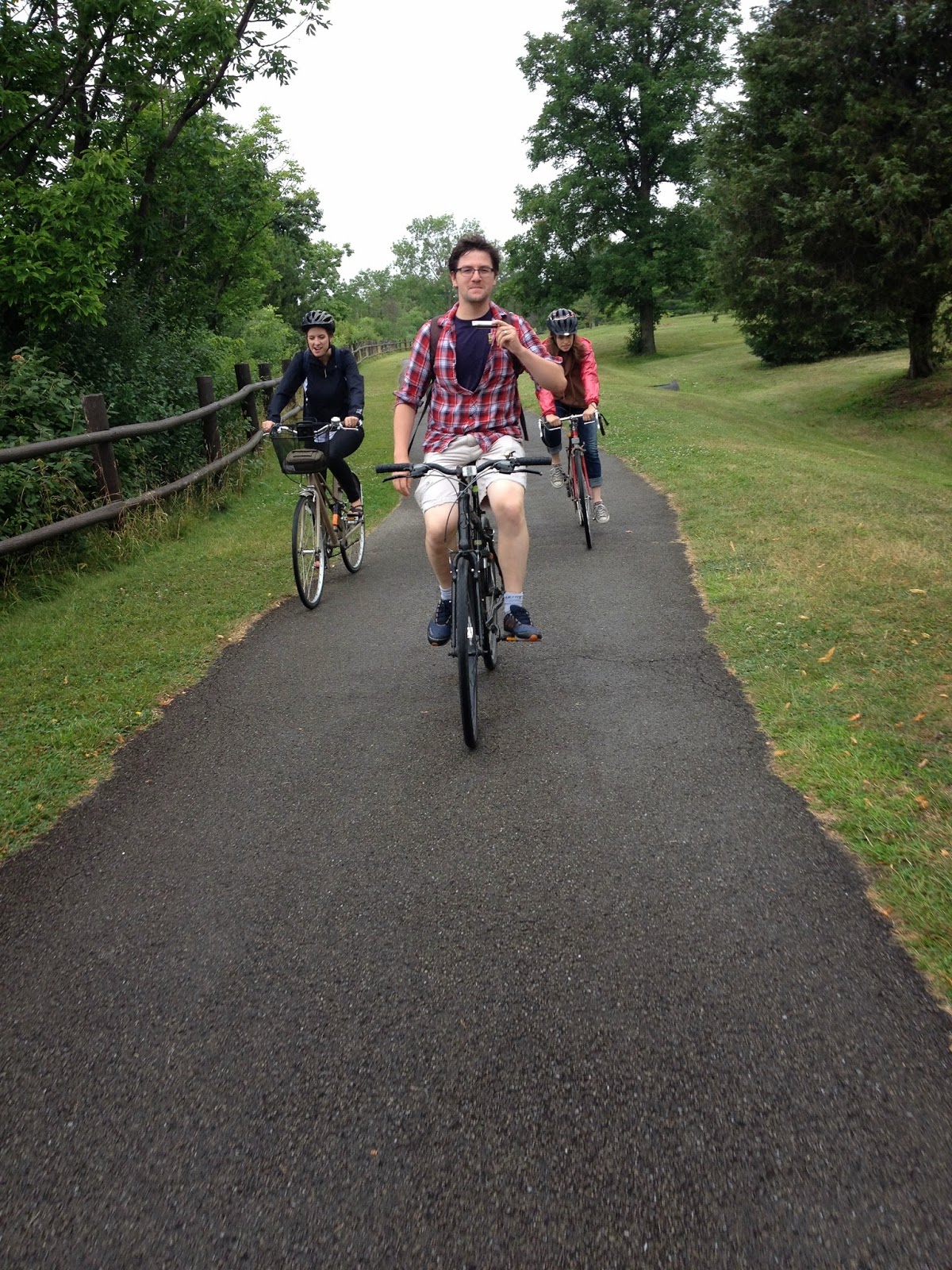 As the rain started to come down heavier, we saw a sign for the Mackenzie Printery and Newspaper Museum. Alex, a massive Mackenzie fan, flipped out. He didn’t realize that this museum was on our route. Naturally we had to make a pit stop and it was actually fantastic. A young, deeply knowledgeable guide gave us the full tour and we got to handset our own typesetting to make a souvenir poster. Our guide was a fountain of interesting facts. Didja know that idioms like "cut to the chase" and "mind your p's and q's" have their roots in language used by typesetters? You'll have to go to the Mackenzie Printery for the explanation. 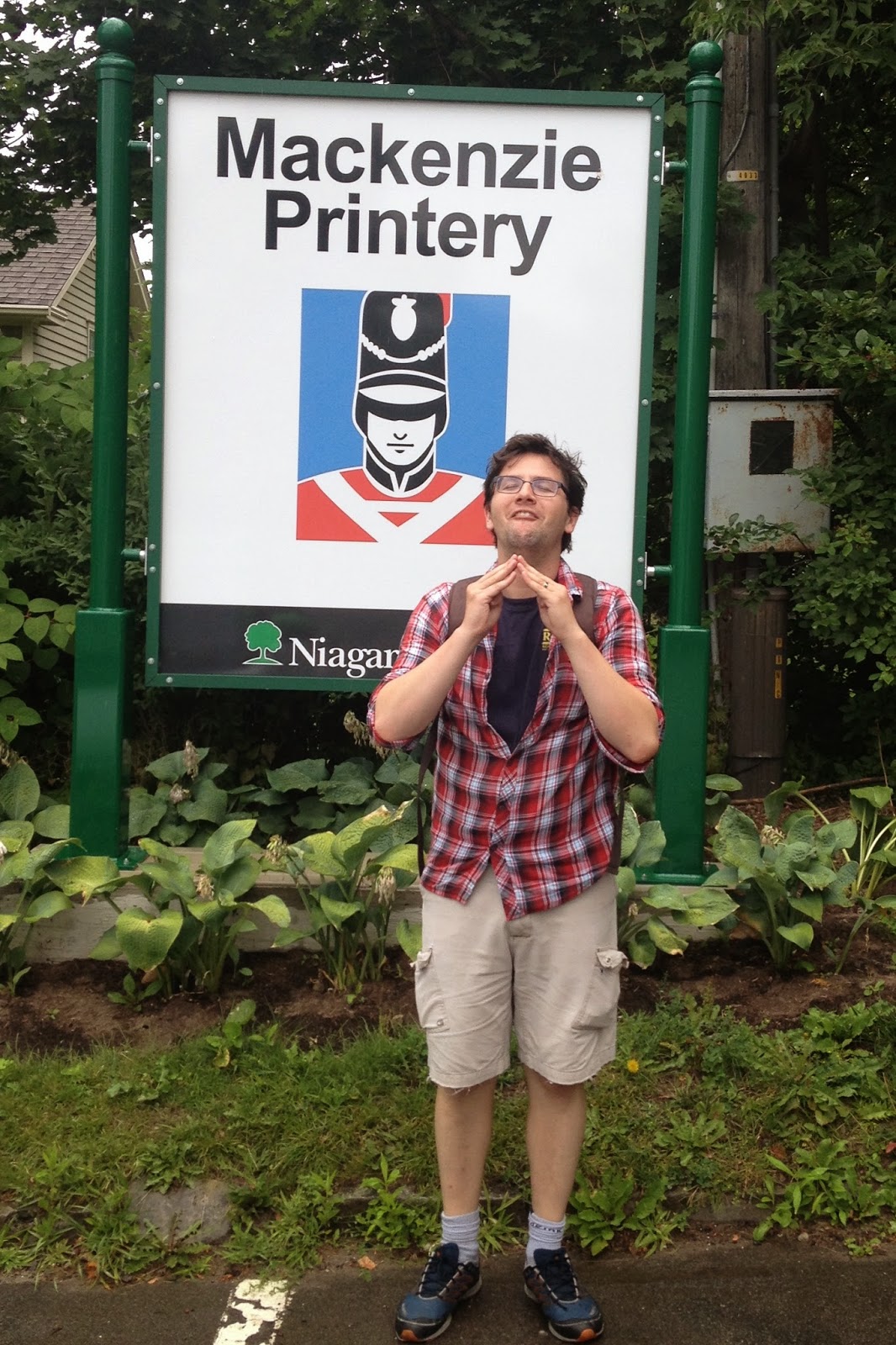 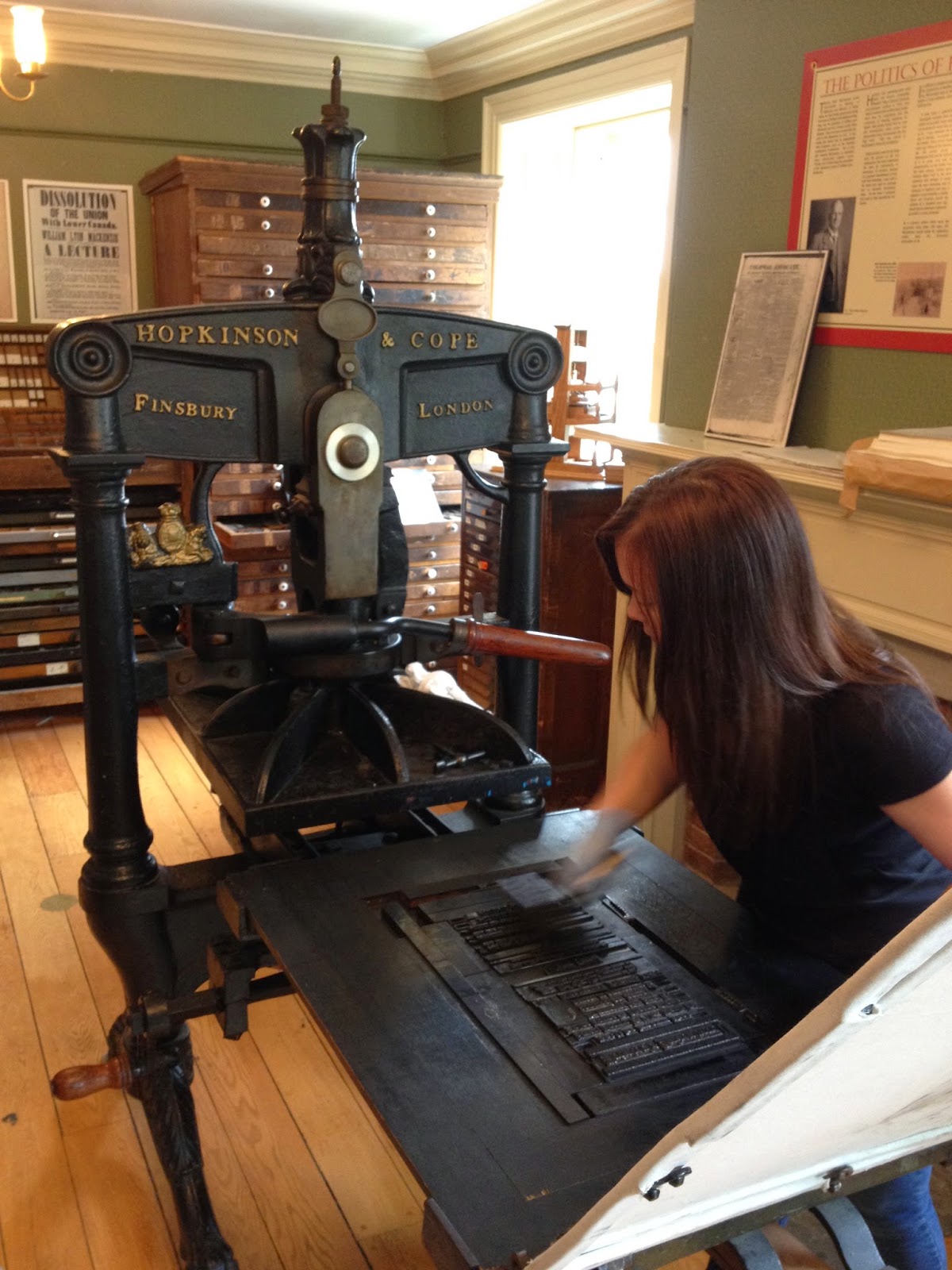 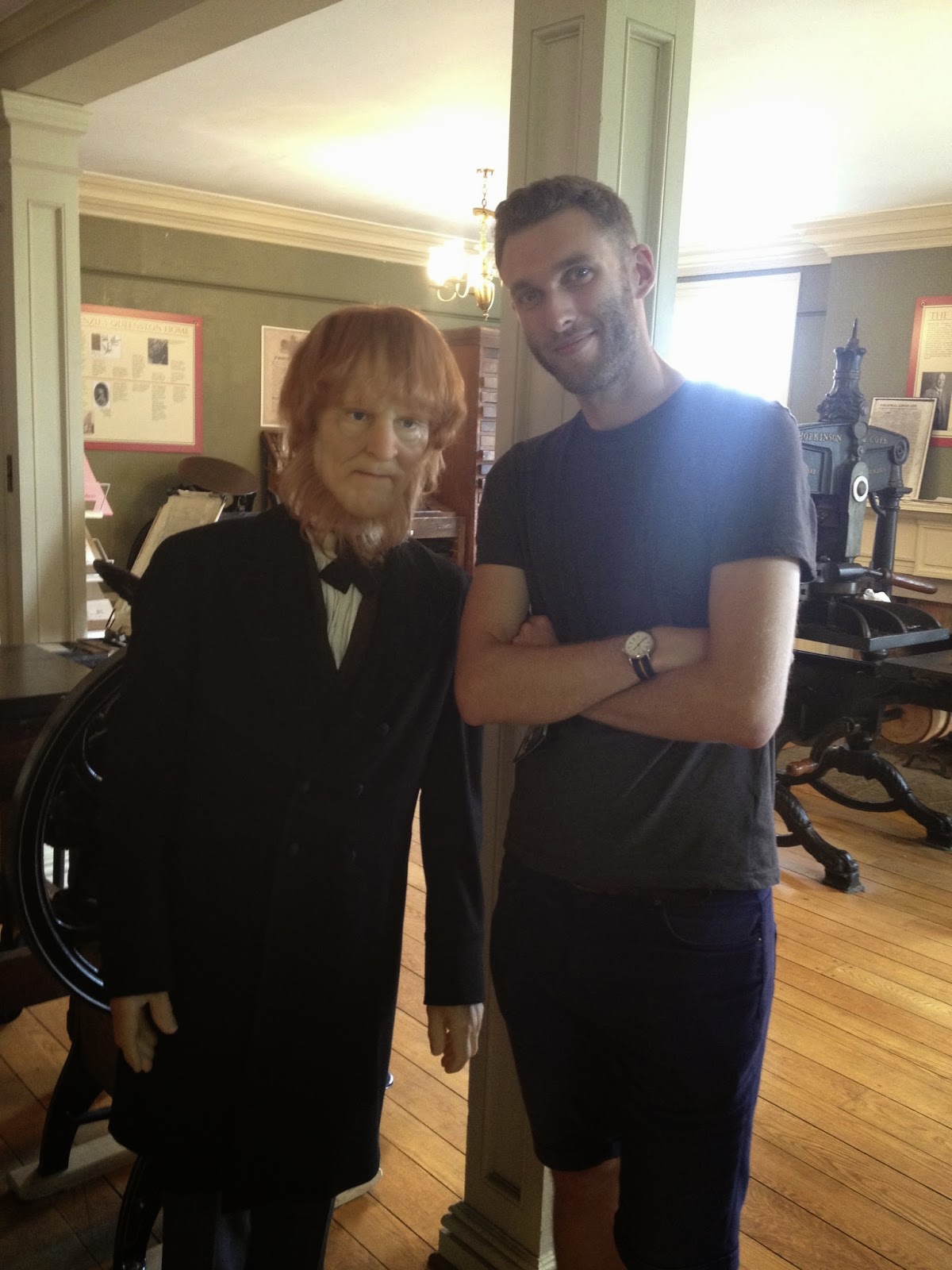 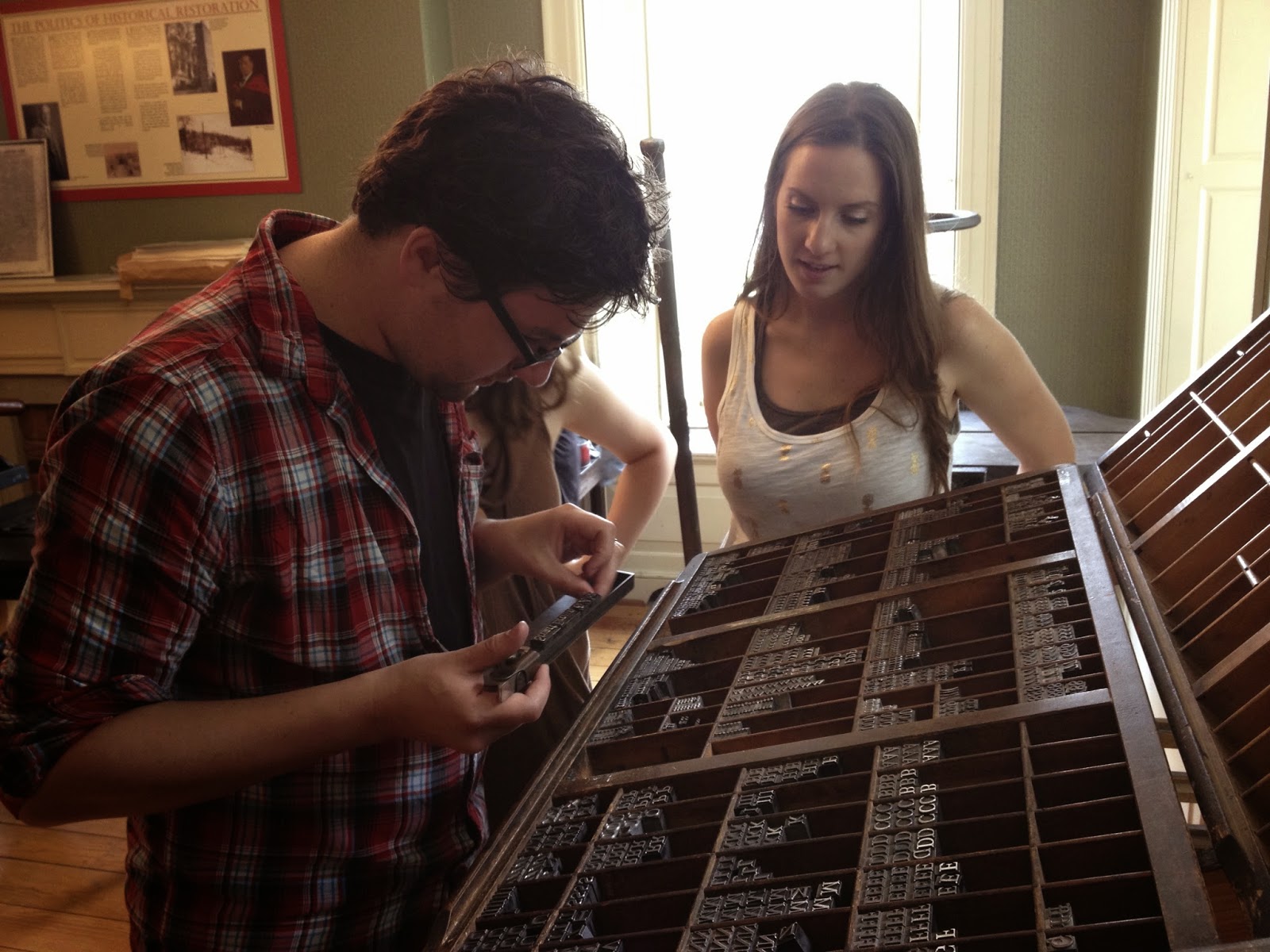 Back on the road, with the rain coming down full blast, we decided it was high time to pop into a winery or two. It’d be rude not to. We cheersed each other as we stood shivering, dripping wet amongst the dry tourists who opted to, y’know, take cars/tour buses as opposed to not, y’know, cycling in a downpour. 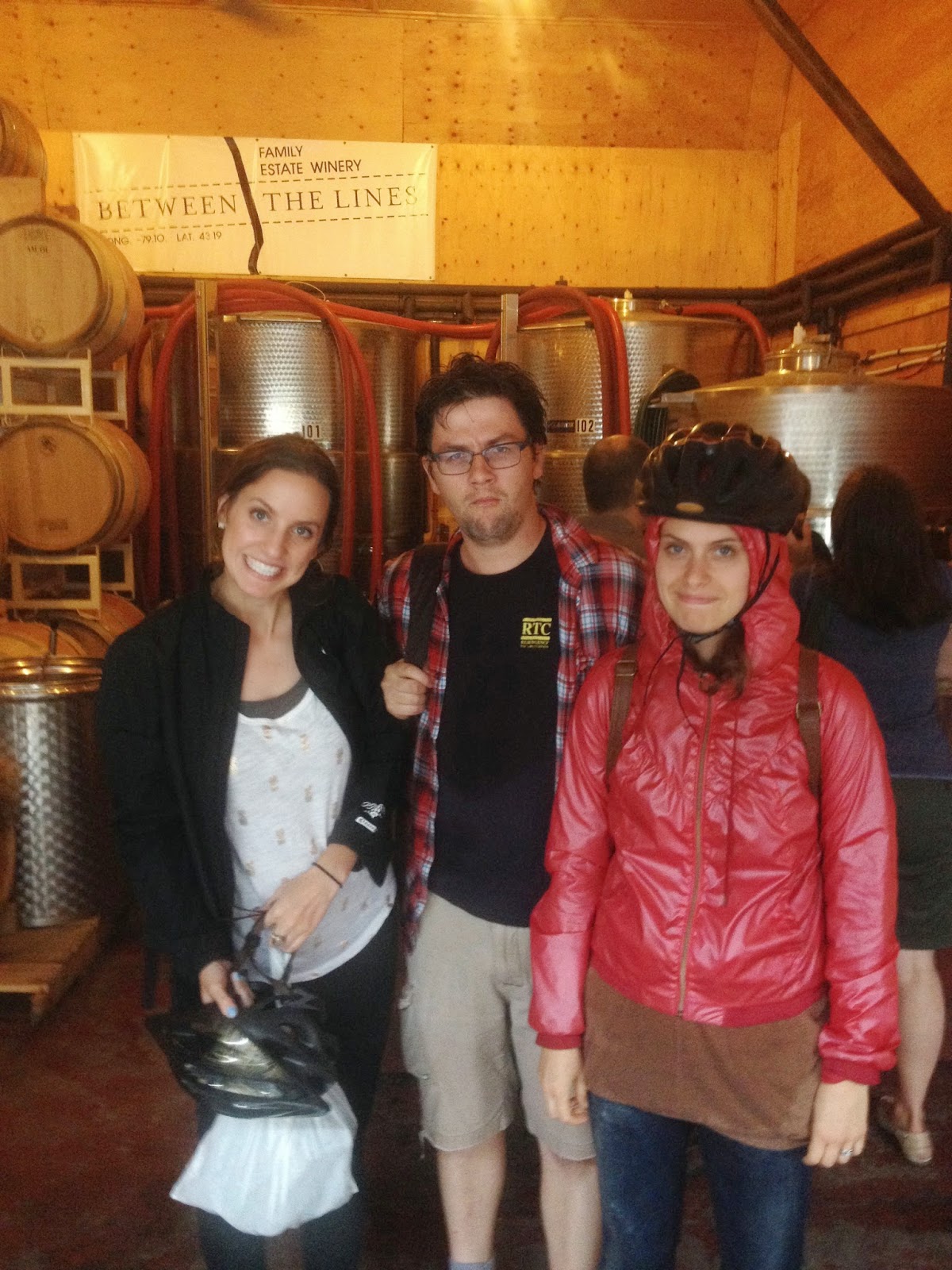 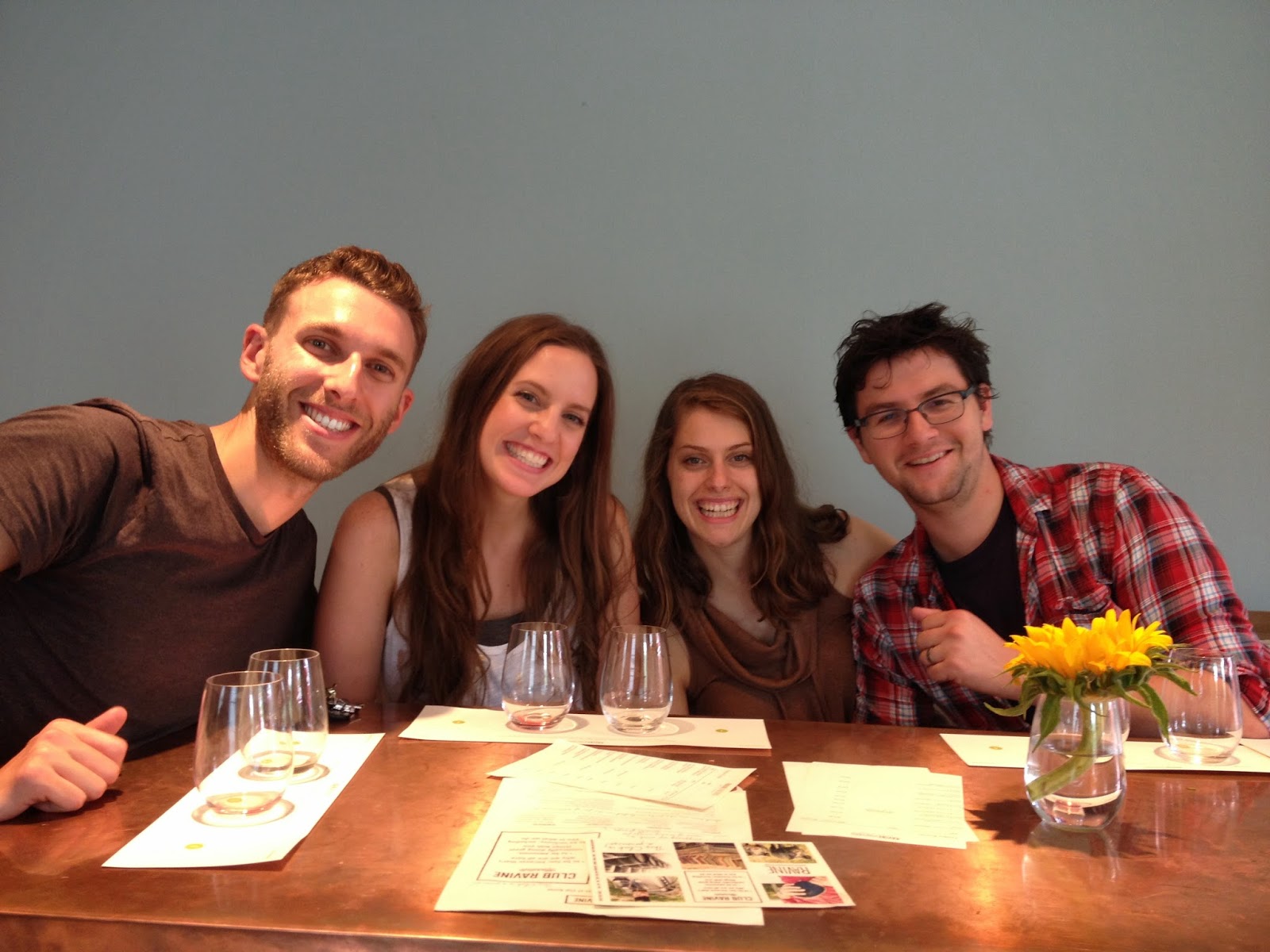 Along with vineyards, the Niagara region also has some breweries. Fact about me: I like craft beer. A lot. One brewery of note is the Silversmith Brewing Company. It’s in an old converted church, which is fitting because their black lager is heavenly.

Accommodations can be a little pricey in Niagara-on-the-Lake. Since I have an affinity towards quirky, tacky and inexpensive, I suggested we stay at The Anchorage Inn. I gotta say that I am lucky to have such easy-going friends who see the humour in places like The Anchorage Inn. I wouldn’t recommend this place unless, like me, you delight in establishments that are so bad, they’re good. Just getting our rooms was a comedy of errors. For a while it seemed like nobody worked there… then when we finally got keys, they were to a room that was already occupied by someone in the shower… the next room we tried was under construction… the whole place had an aroma of a wet basement… it was dimly lit… the TV only played static… I kept expecting Basil Faulty to go goose-stepping by at any moment… but truth be told this was actually the kind of place I get a kick out of and we had a blast.

Plus, by the time we’d finally sorted out the rooms, the rain had stopped! 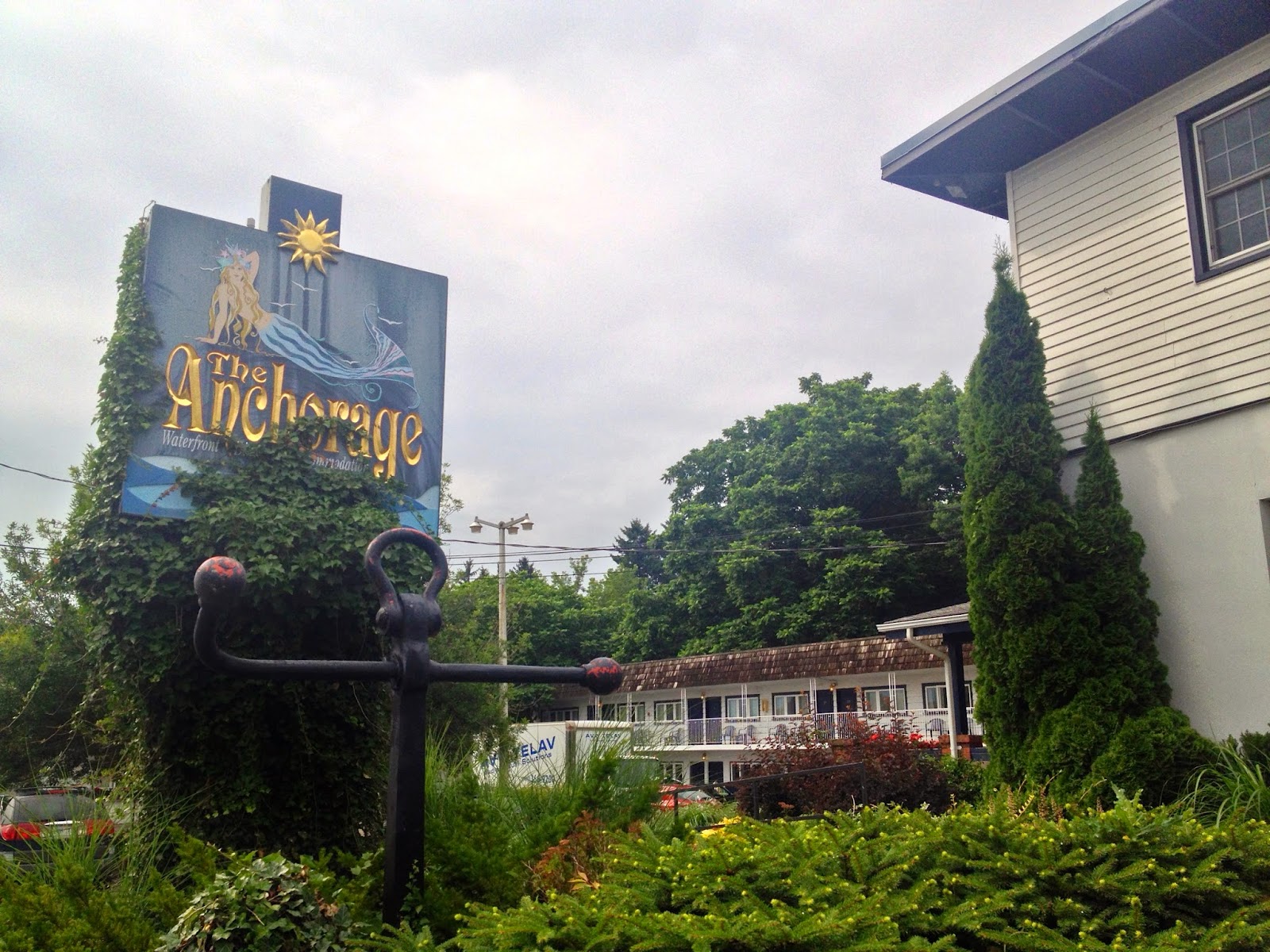 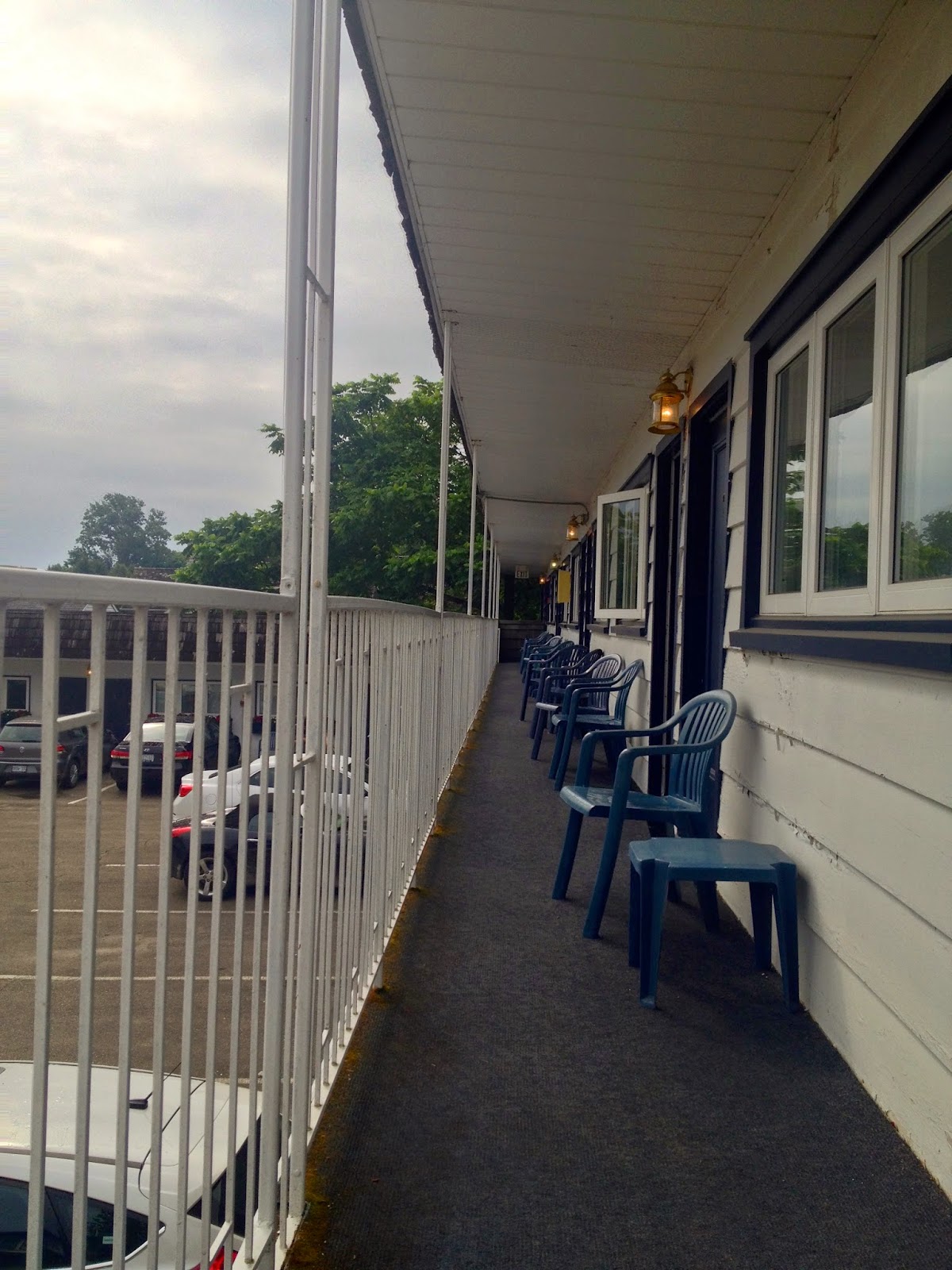 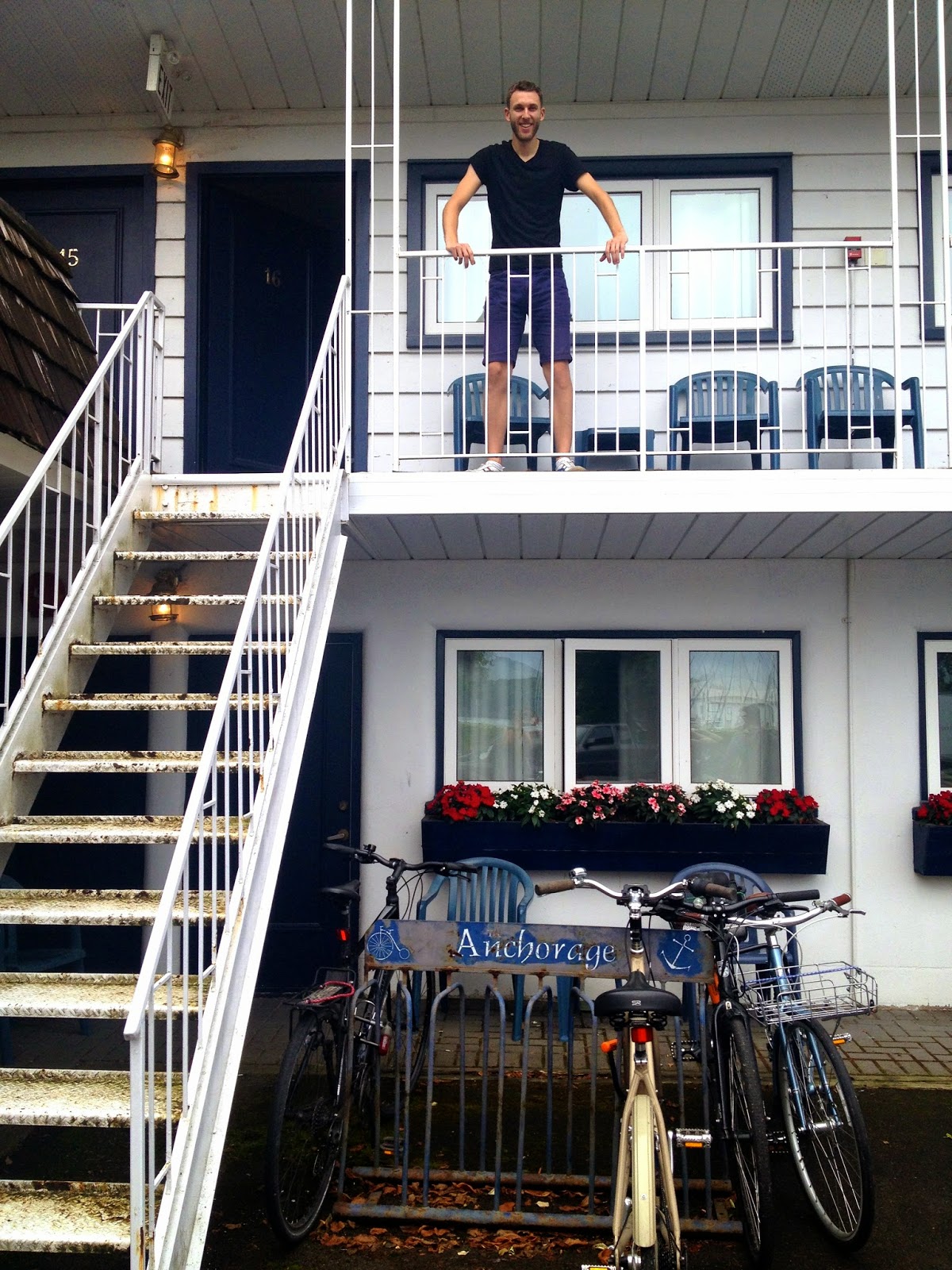 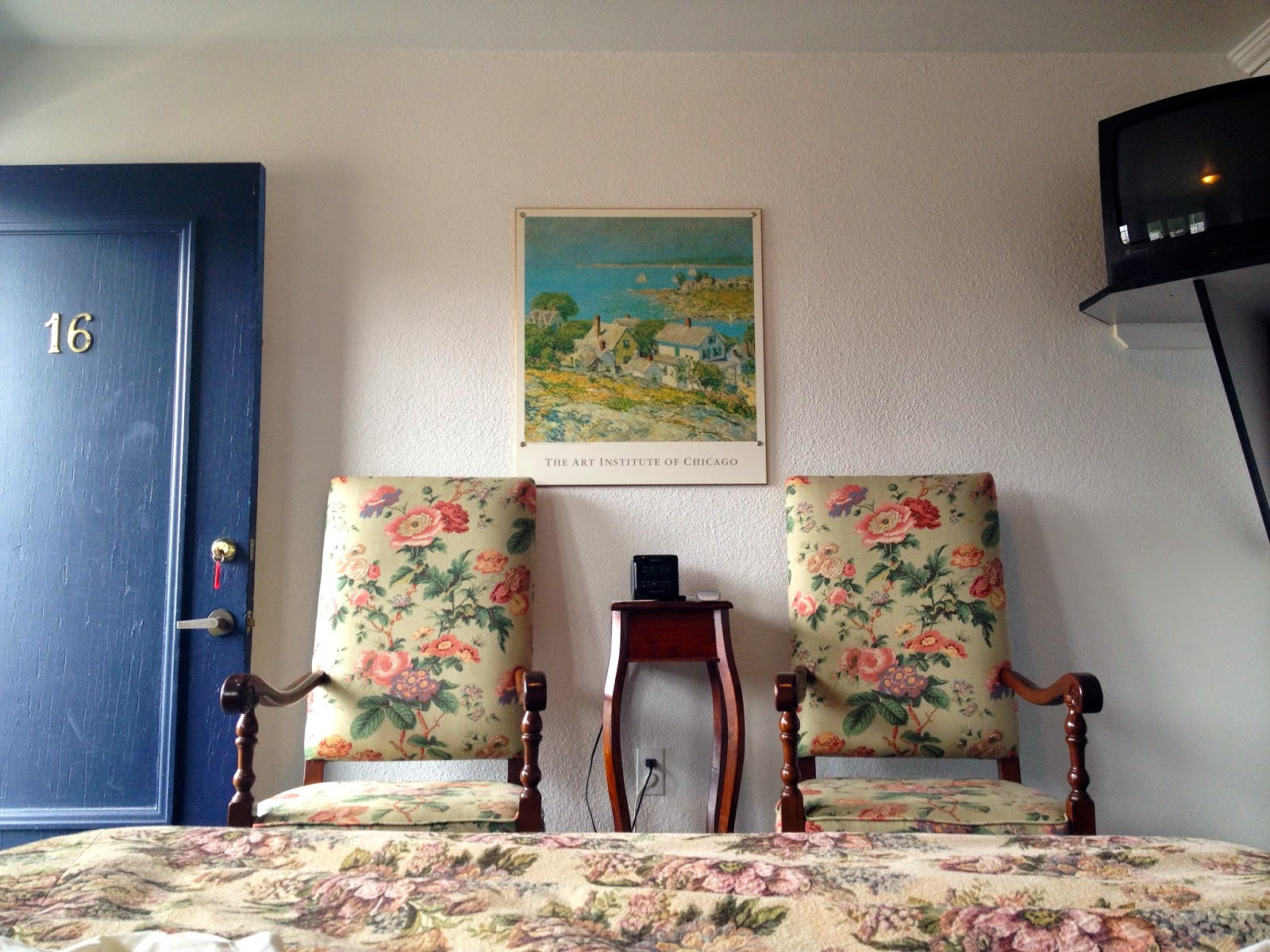 So, our bike gang went for a tour of the town (it’s inarguably a very pretty place, but almost too perfect. Verging on Stepford style).  As we sang our theme song (“Ridin’ Dirty”, naturally), we rolled through some of the older streets and oooed and awed at the lovely homes. We looked out at the-Lake (which you’ll find Niagara-on) and we capped the night off with a visit to the Olde Angel Inn (Ontario’s oldest inn and a fine establishment at that).

Weather was on our side for day 2.  After a fantastic maple latte at Balzac’s we waved goodbye to NOTL and set off for a sunny ride back to Niagara Falls. Along the way we made a stop at the Niagara Oast House Brewery for some ping pong and a flight of excellent beer samples followed by a detour to a vineyard we’d previously discovered on a winter trip in the Niagara region. The Five Rows vineyard is a true gem. It’s a family owned, family run operation making phenomenal craft wine. Walking into the barn, you feel right at home (and my home isn’t even a barn – that’s the sort of effect this place has on a person). The matriarch of the family greets you like a long lost pal and sits you down for some wine, cheese and warm conversation. 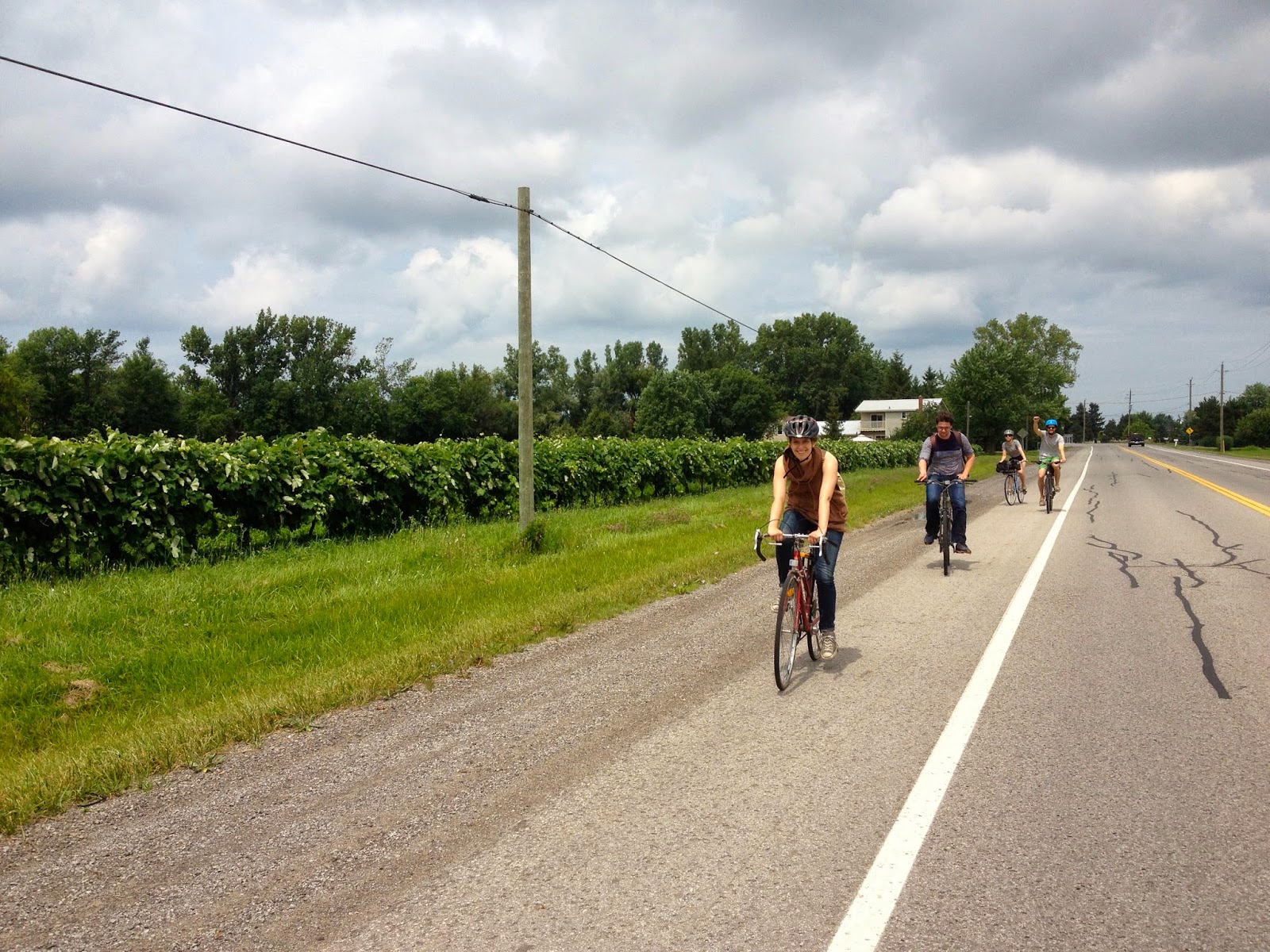 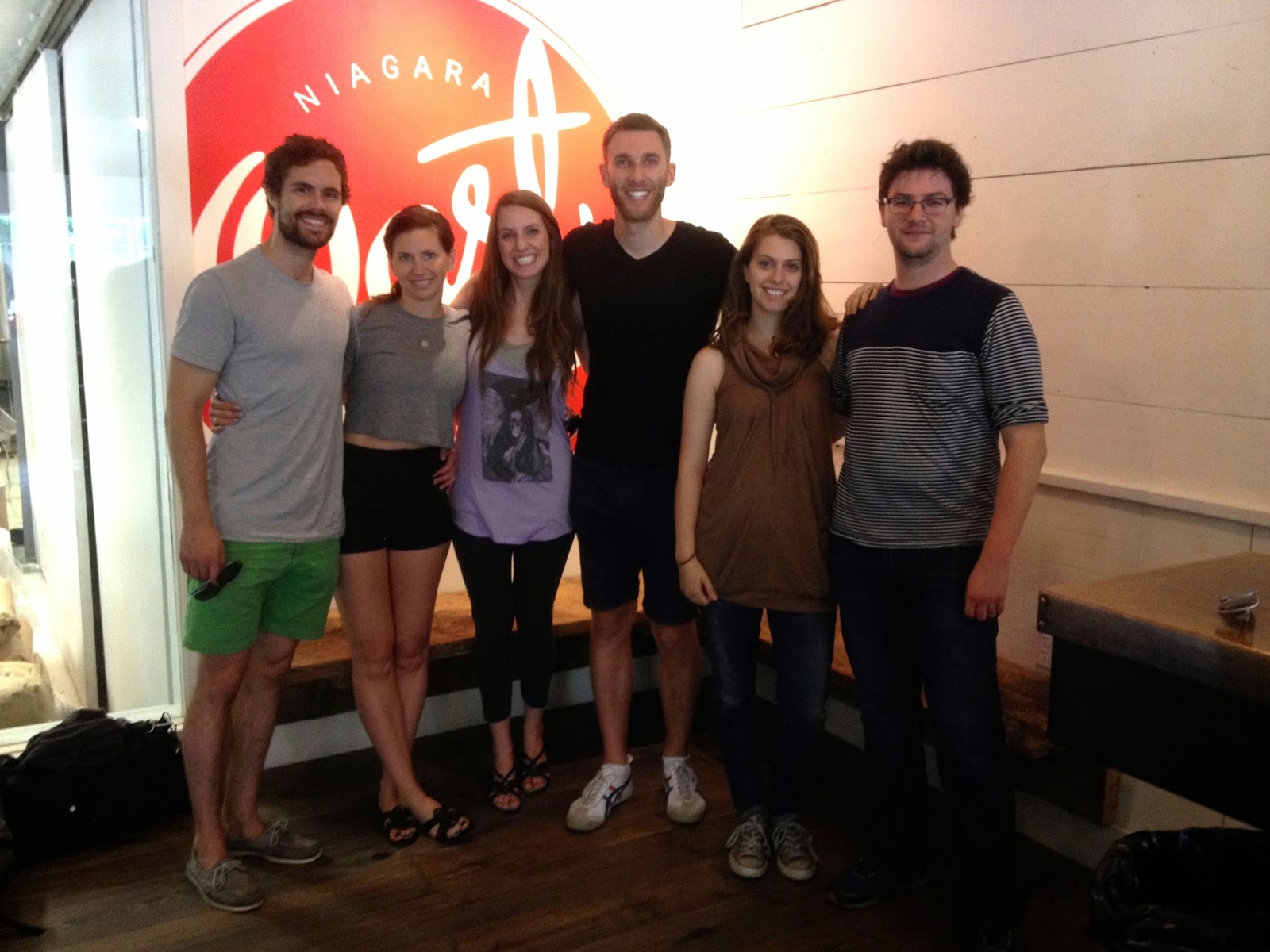 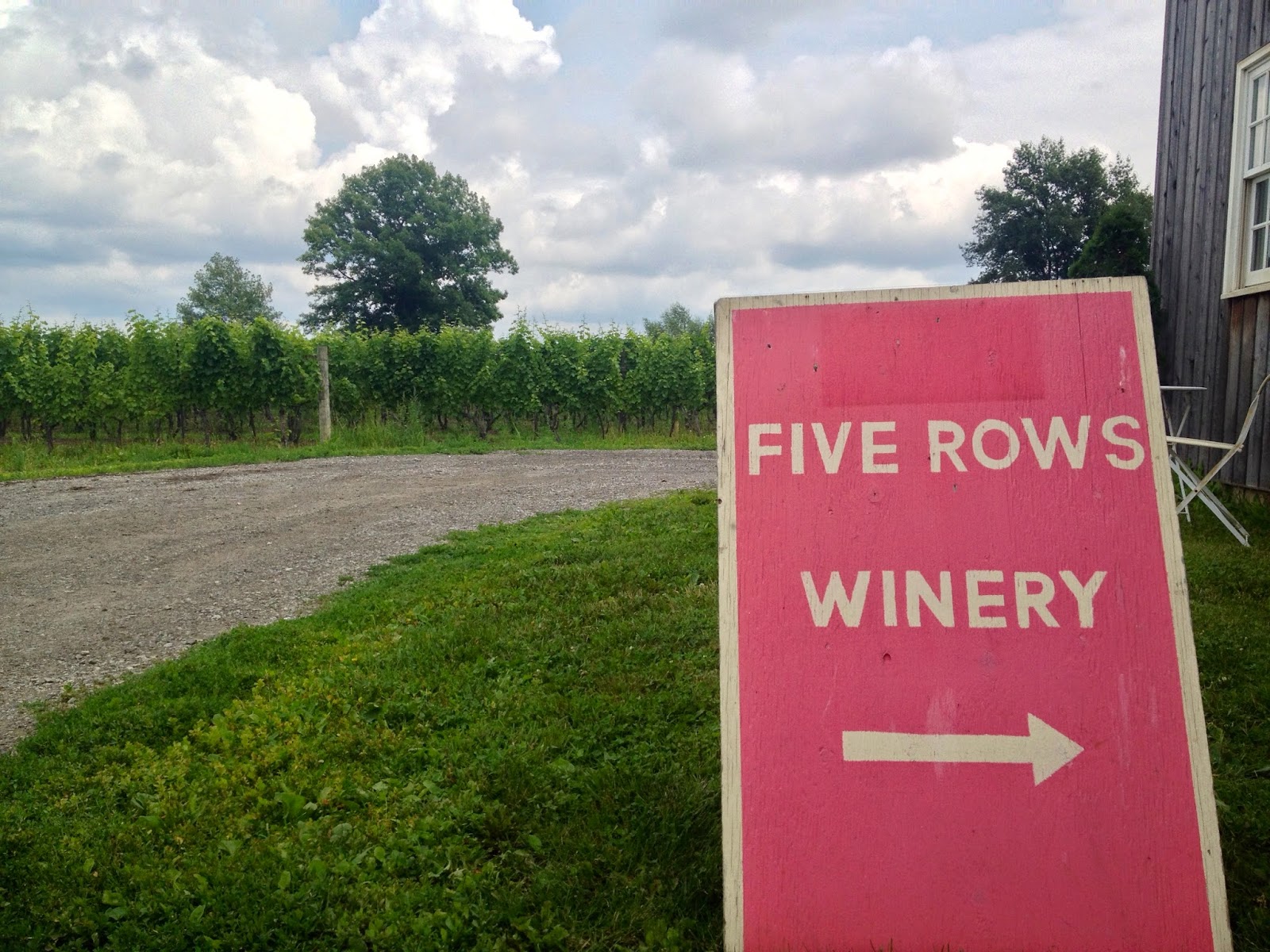 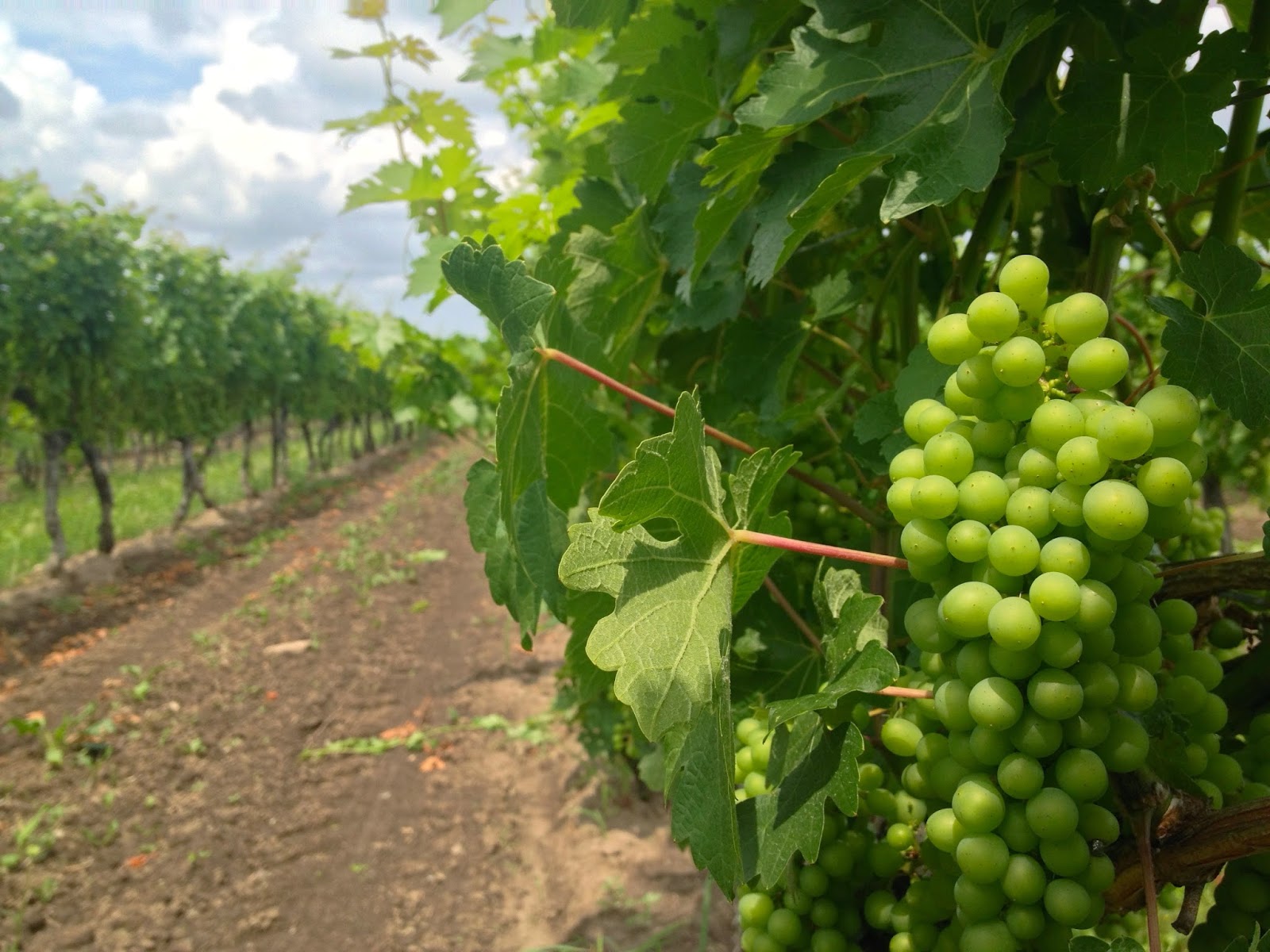 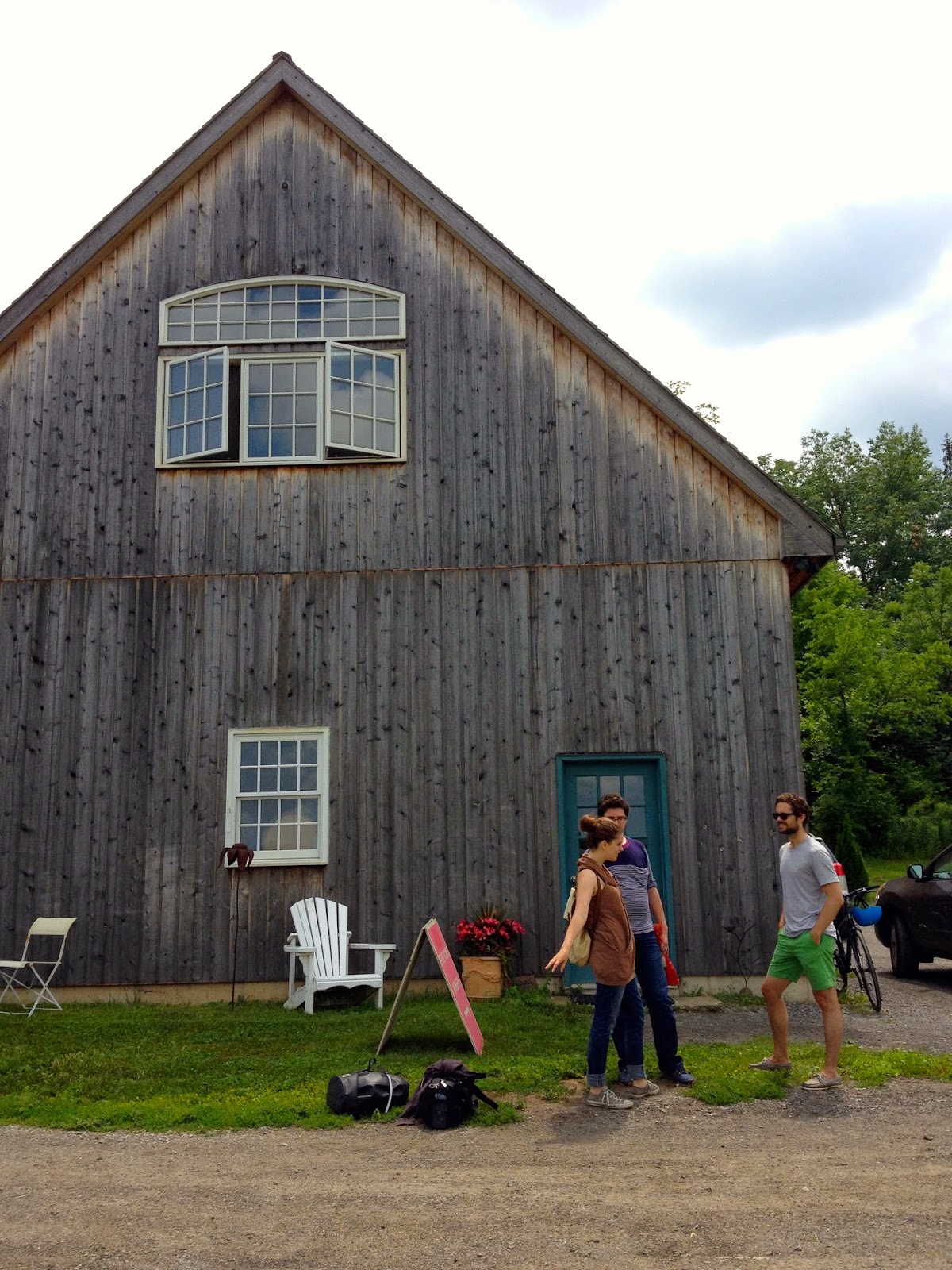 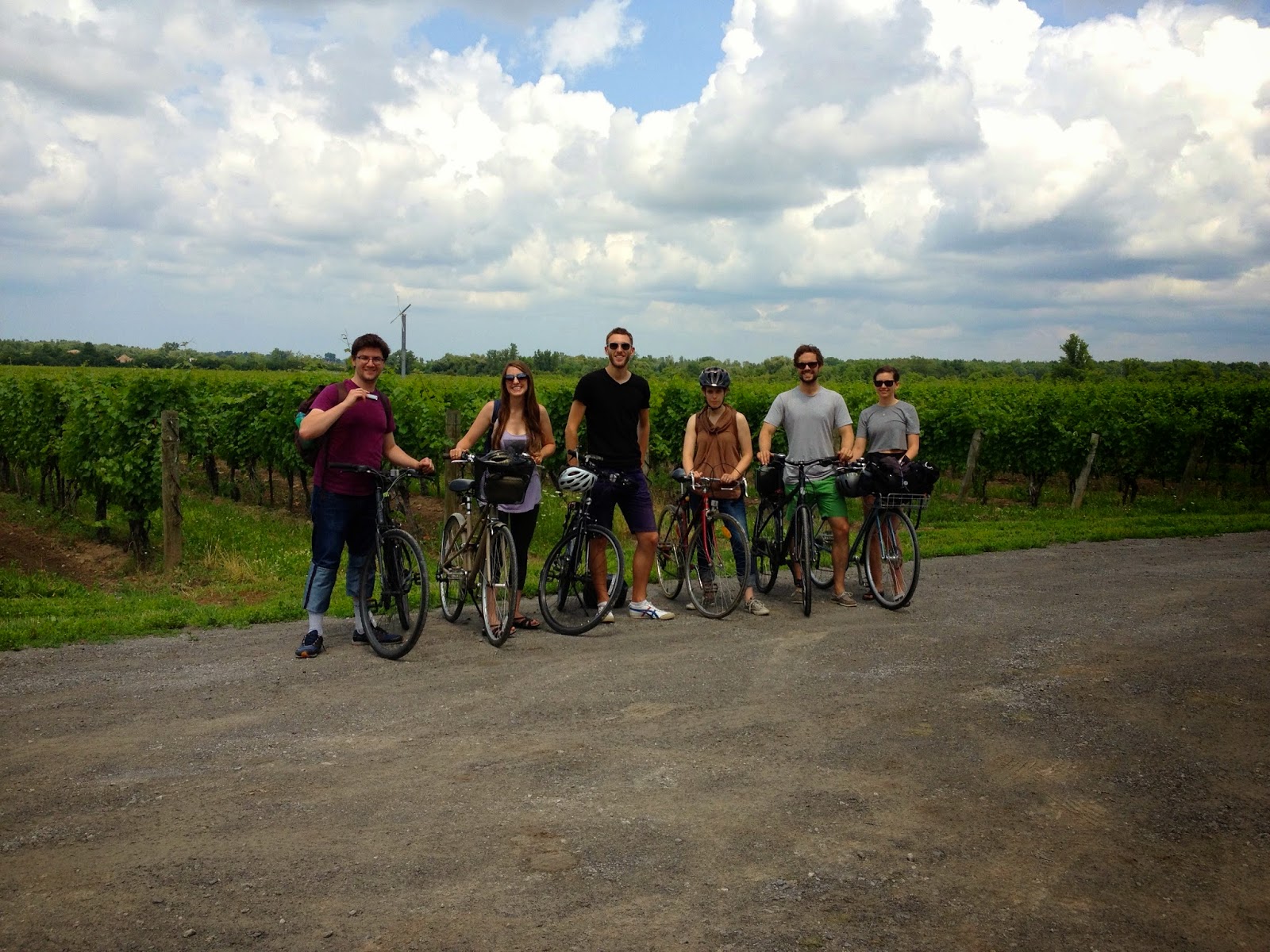 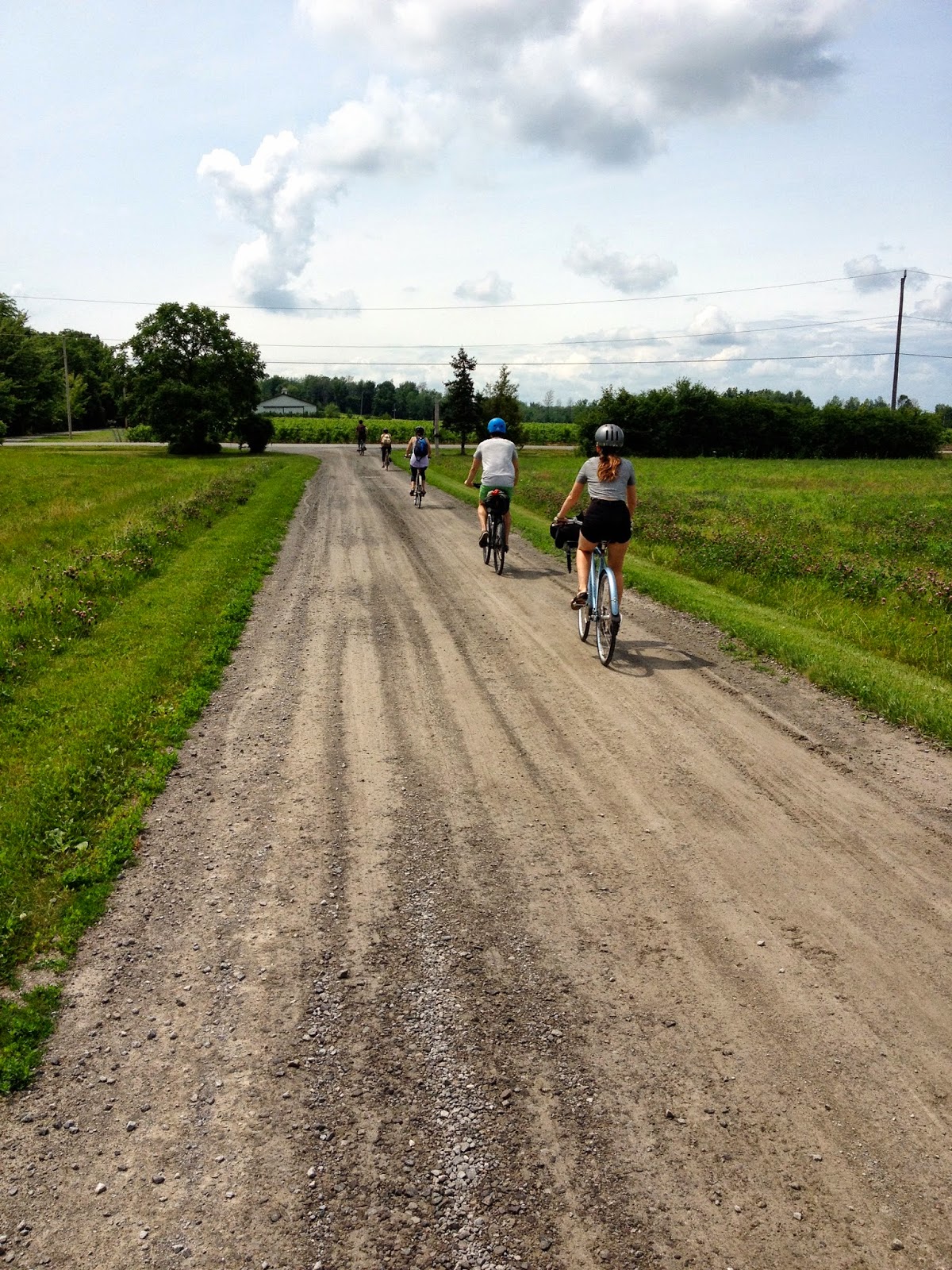 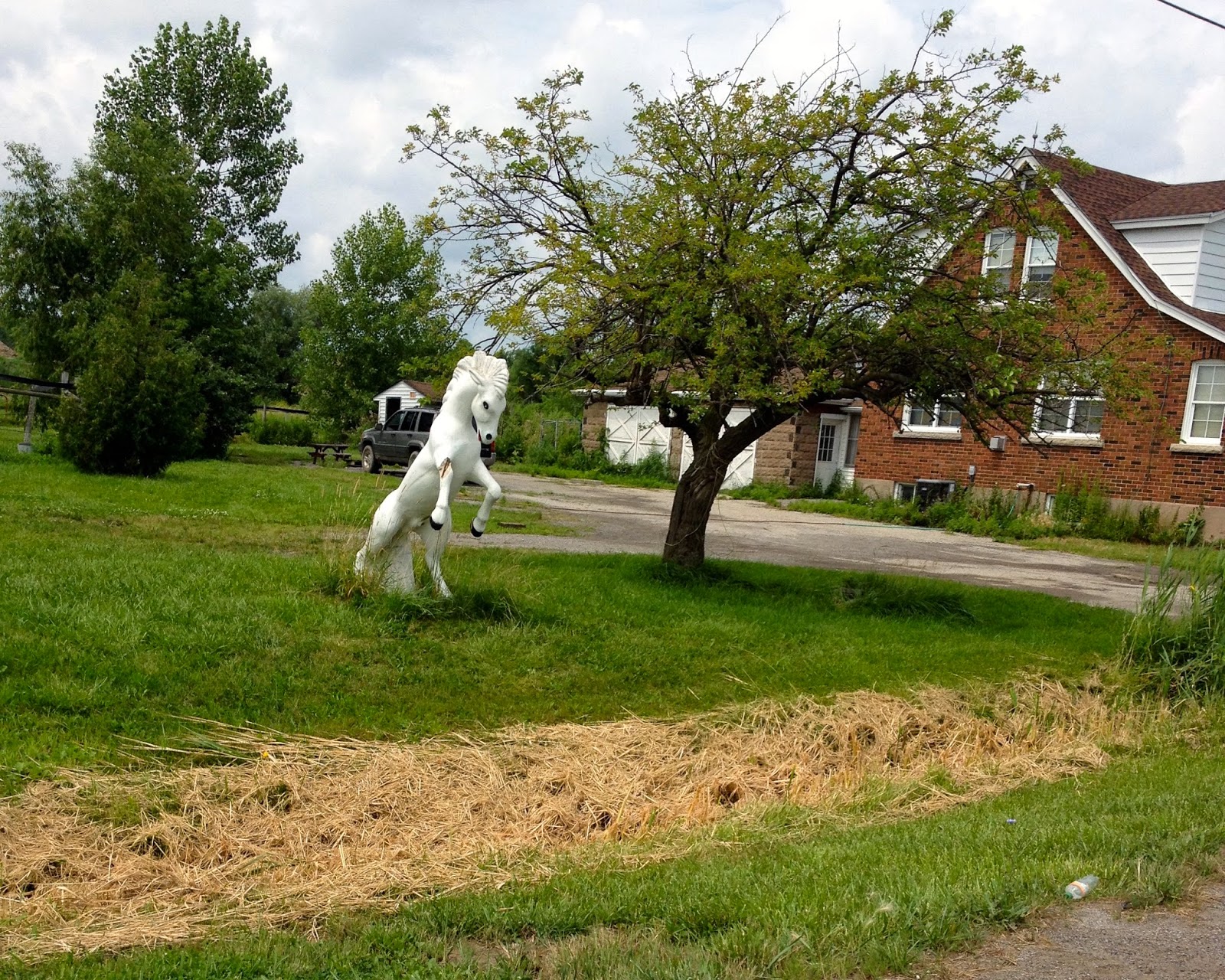 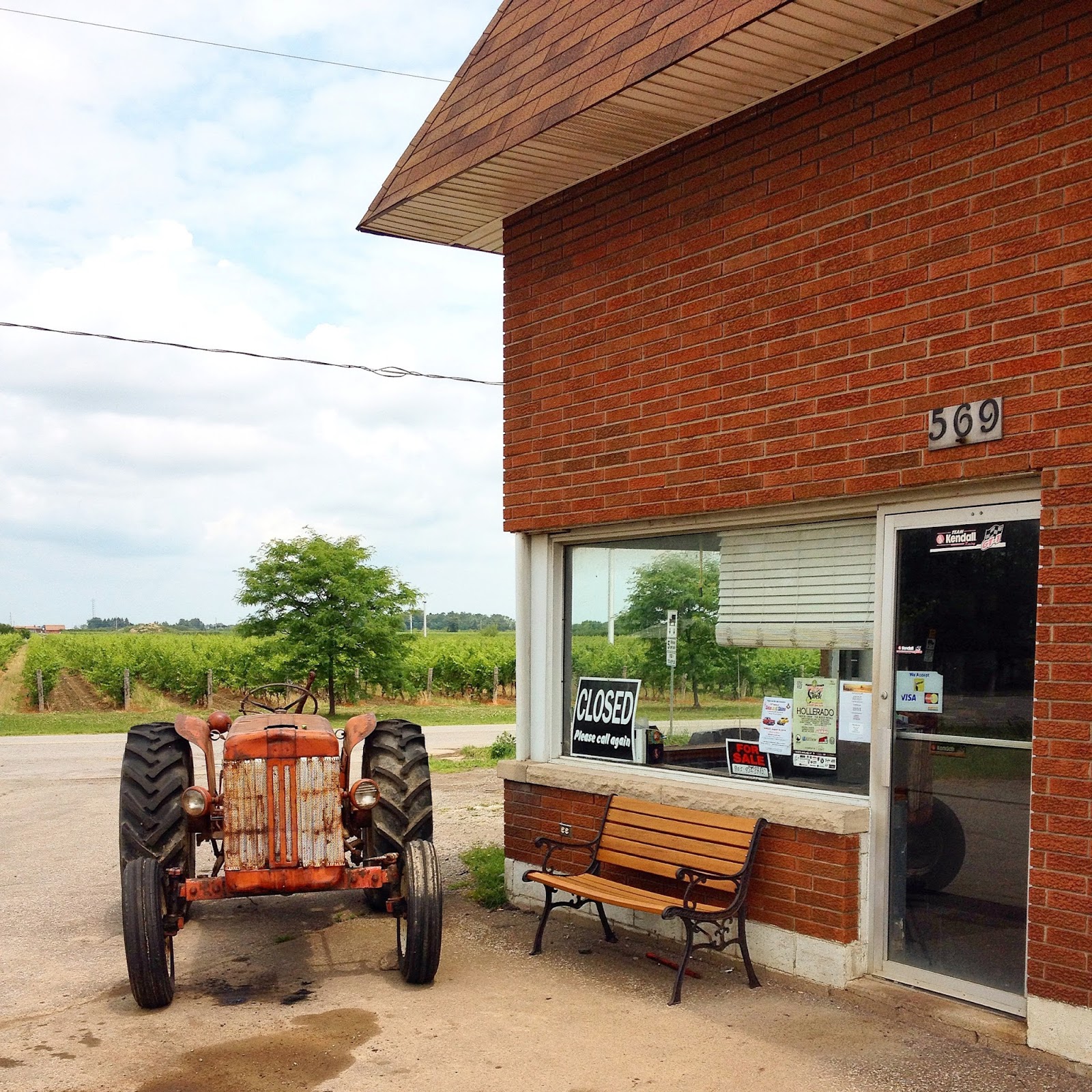 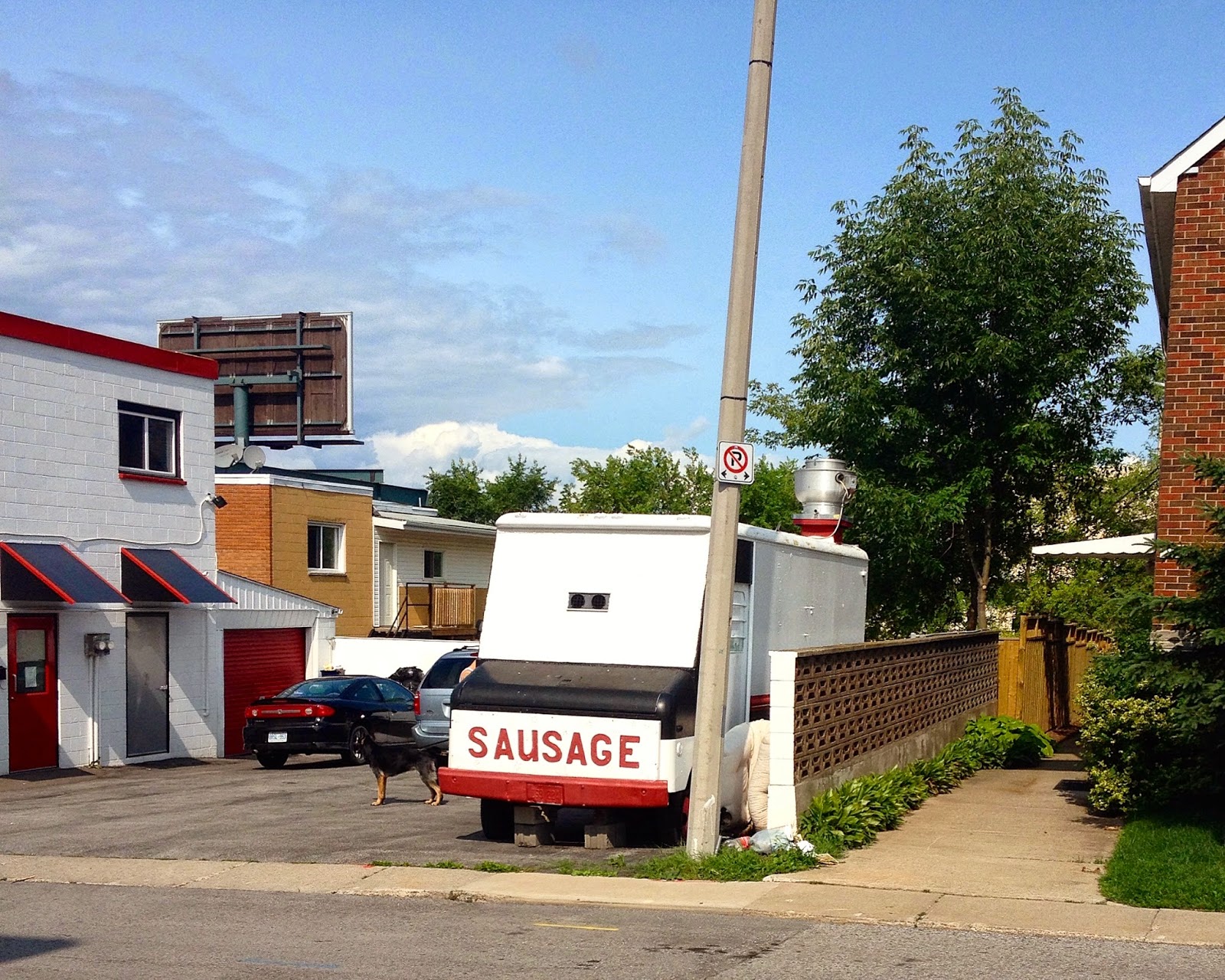 As we got to Niagara Falls we stopped in to check out the motel exhibit (titled [No] Vacancy) at the Niagara Falls Art Gallery. Detailing the honeymoon history of Niagara, this exhibition explored the motel culture that was such a big part of the region in decades past.  They had set up retro motel rooms and a lobby desk. I wish more of these unique motels were still in operation. Clearly, I have fond feelings towards odd motels. 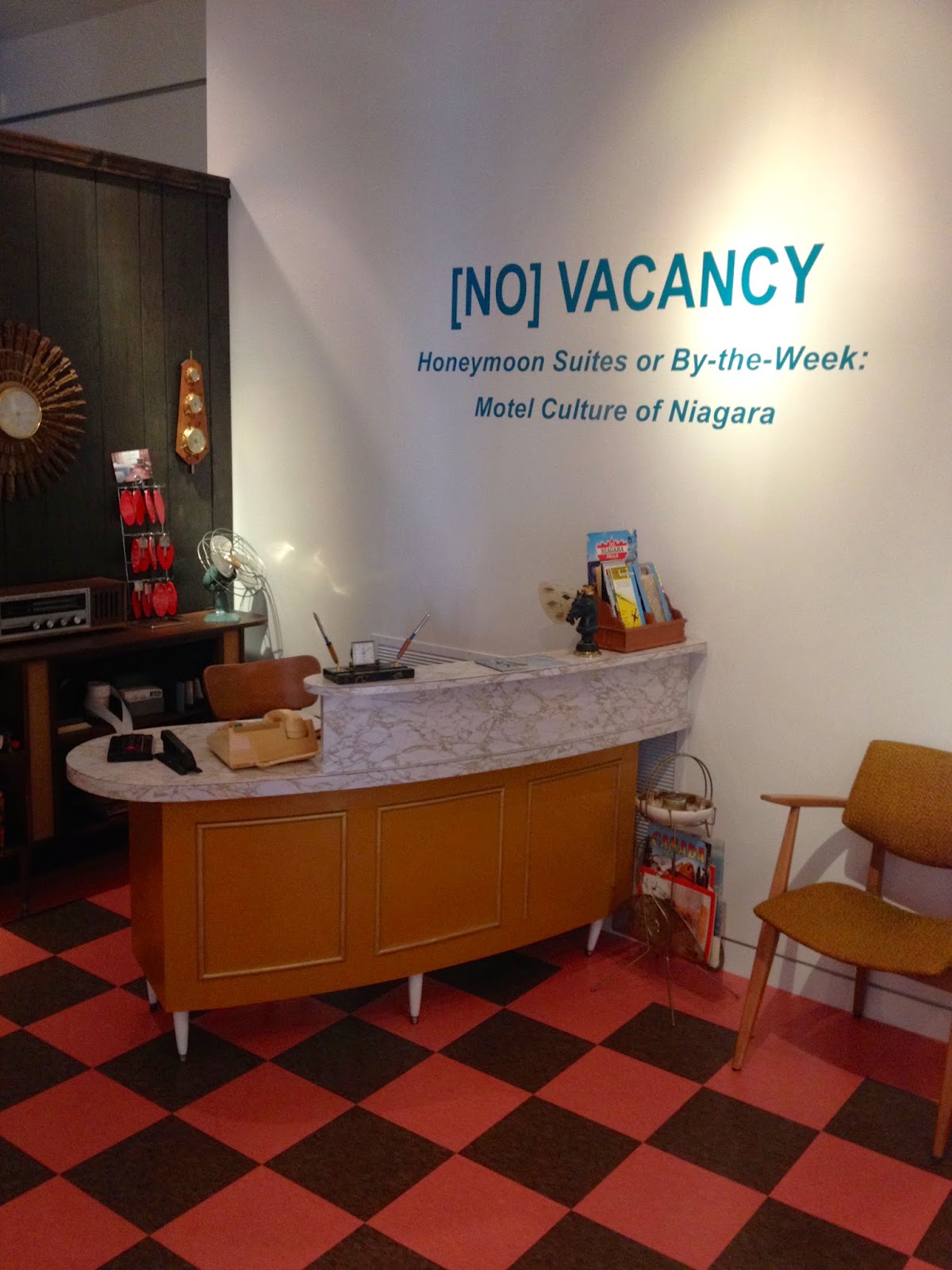 A ride down the tackiest street in the country Clifton Hill was a must. We dodged throngs of Hawaiian-shirt-wearing, camera-totting, definitely-not-locals; we marveled at the giant hamburger-wielding Frankenstein’s monster (aka my favourite view in this scenic city); we chuckled at the hilariously-bad wax museums; we sped past the extortionately-priced souvenir shops. Then we found ourselves basking in the mist of the eponymous falls/8 billion tourists. A couple of obligatory snap shots later and we headed towards the train station. 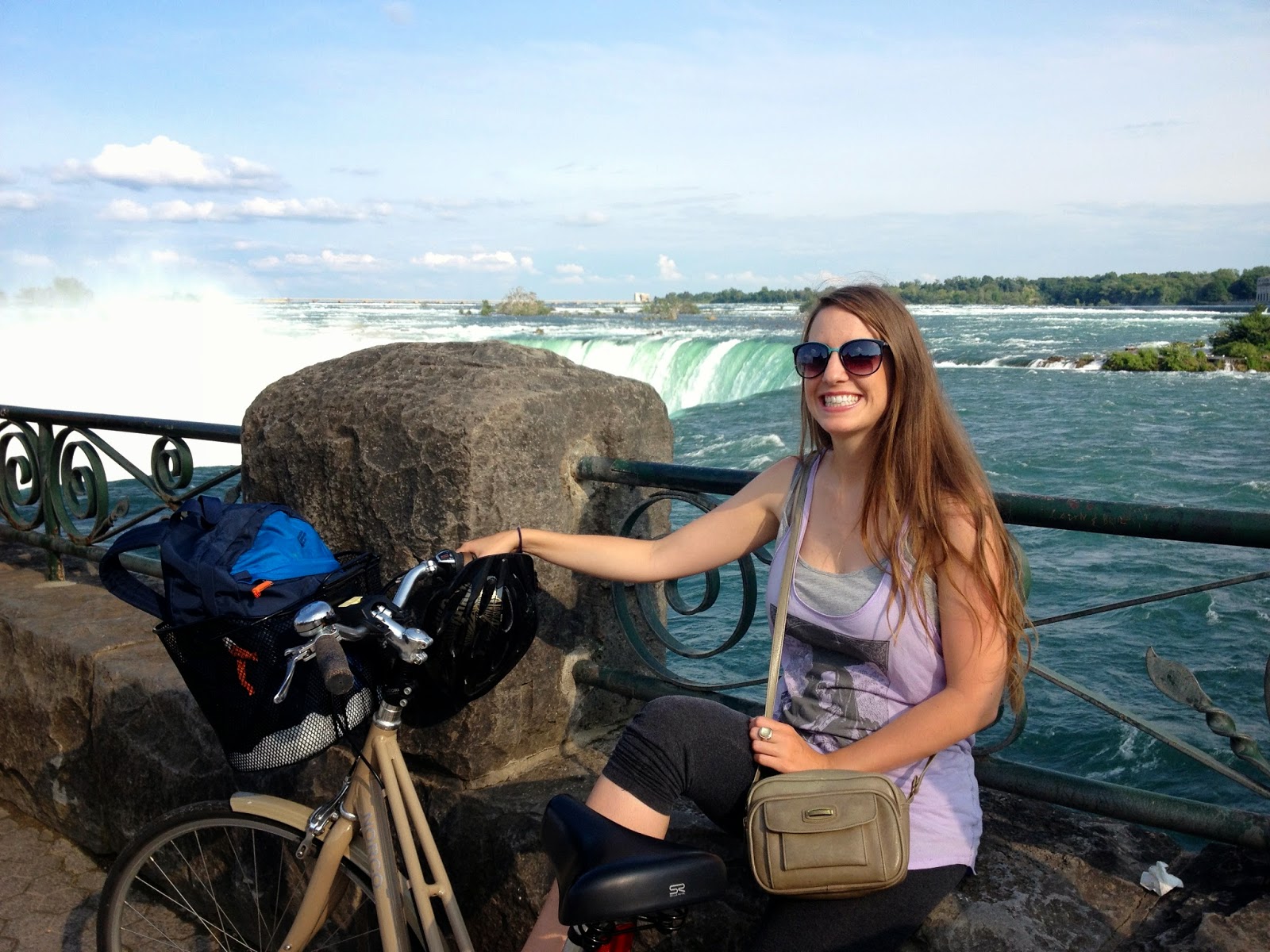 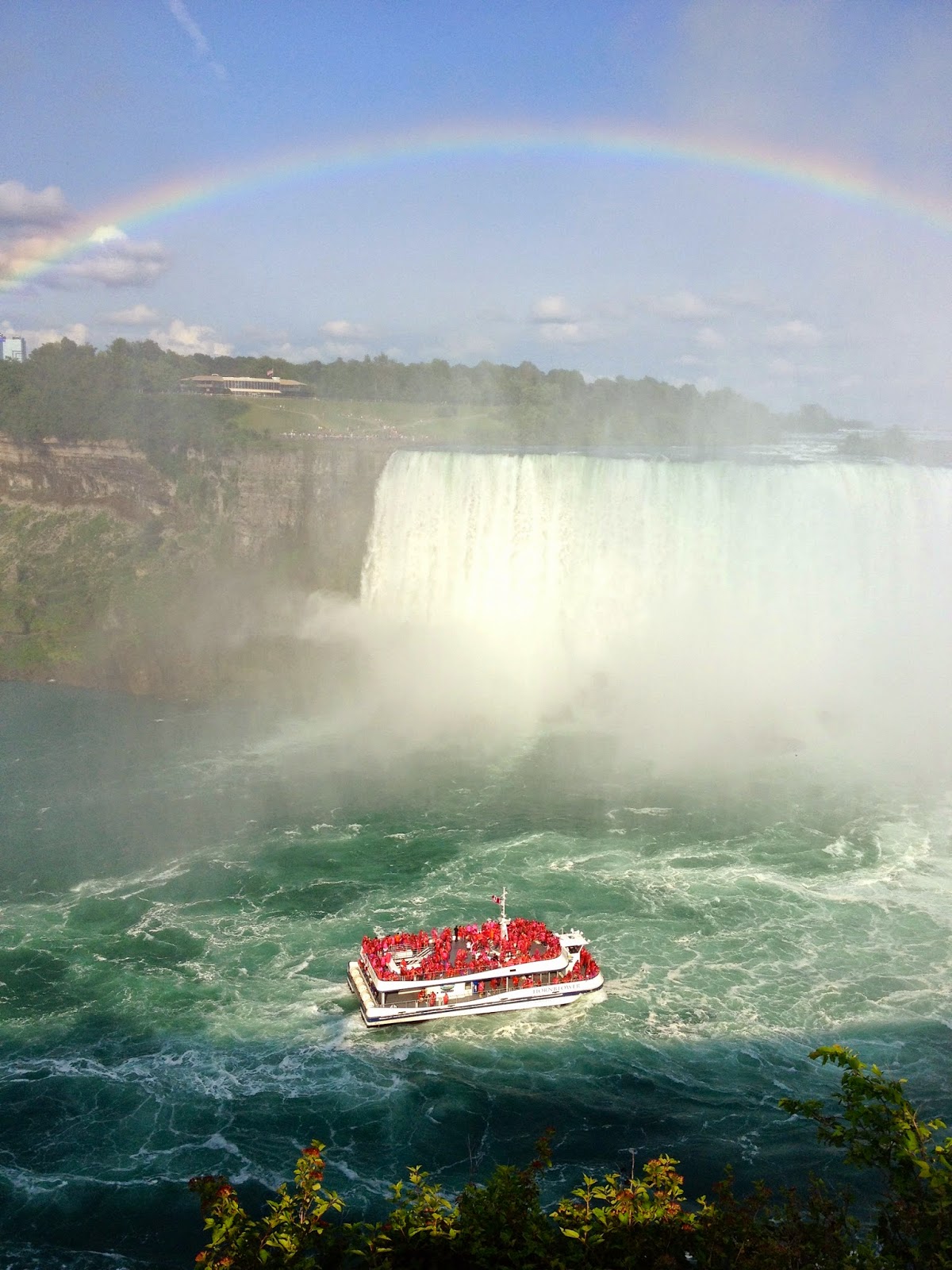 The final moments of our trip were actually some of the strangest. We suddenly found ourselves on a street lined with many shops and restaurants but all of them were closed. There were no people walking around and no cars driving (bizarre, especially having just come from the ram-packed area directly surrounding the falls). It was eerily quiet – except for the haunting tune of oldies playing out of speakers on lampposts along the street. I’m pretty sure we biked into another dimension. And that was a cool way to end our adventure. 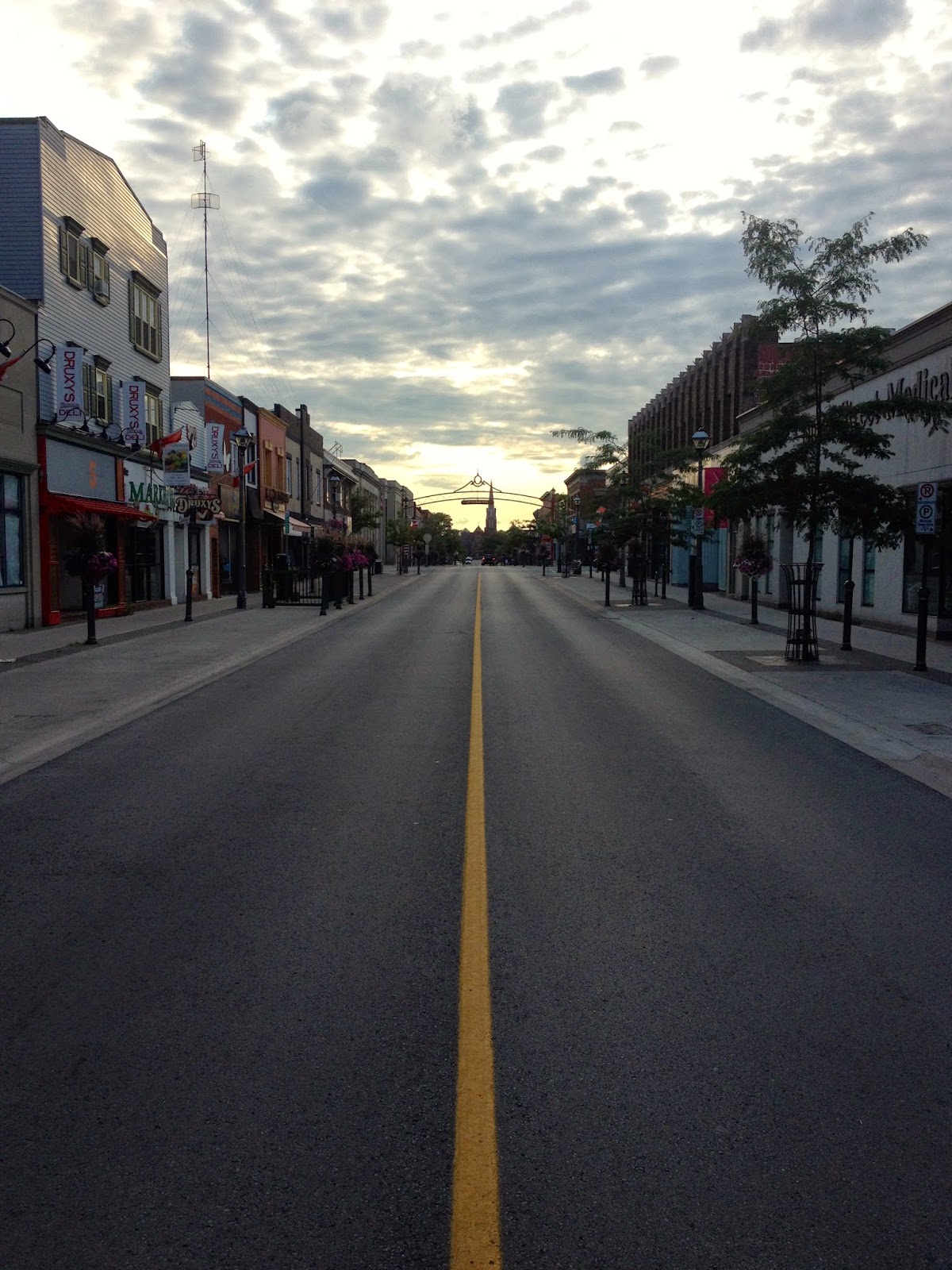